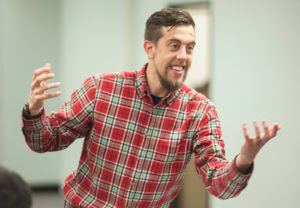 David Getz, Concert Orchestra conductor
​David Getz has been the Orchestra Director of Morton High School since 2012. He received his Bachelors of Music Education from Illinois Wesleyan University in 2012, where he graduated Summa Cum Laude. Getz is a pianist and violist, though he also enjoys playing his mandolin, guitar, accordion, and alto recorder on occasion. As a performer, Getz won the Illinois Wesleyan Concert/Aria Competition in 2010, and he performed the piano solo part of Rhapsody in Blue at a concert in 2013. Getz guest conducted the Central Illinois Concert Orchestra in 2015 as well as the District 2 Middle School Festival Orchestra in 2016. Getz is also an avid composer; the Morton High School Orchestra has premiered three of his compositions in the past five years. Getz will be presenting at this year’s ILMEA Convention on the student composition program he started in 2012, “The Composers’ Guild.” In addition to music, Getz loves athletics. He ran Cross Country and Track & Field at Illinois Wesleyan, and he is currently the Assistant Cross Country Coach at MHS. He lives in Morton with his wife, Lauren.

His vision for the CICO is two-fold. He wants the ensemble to be a place where students can develop a taste and love for full orchestral repertoire in a wide variety of music styles. He also wants to encourage passion for music making and creativity through excitement, enthusiasm, and excellence!