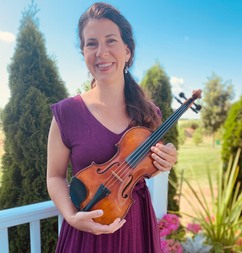 Laura Otto, Suzuki School Director
Laura Otto is an alumna of the YMI organization, growing up near Eureka, Illinois. She earned her B.M. In Violin performance from Bradley University, serving as concertmaster of the Bradley Symphony Orchestra and winner of the Concerto-Aria Competition.  As a violinist/violist, Laura has performed with several symphonies and festivals such as the Peoria Symphony Orchestra, Aria International Music Academy, Nebraska Chamber Music Institute, and Domaine Forget International Music Academy.
Laura has been actively teaching in the Peoria area for nearly twenty years, both privately and at the Sun Foundation Suzuki School of Music.  Laura is a member of the Suzuki Association of the Americas (SAA) and received Suzuki training at the American Suzuki Institute, Chicago Suzuki Institute and the Colorado Suzuki Institute.  Some of Laura’s instructors have included Karin Kelleher, Marcia Henry Liebenow, Kate Hamilton, and Sarah Gentry.  Currently, Laura is the Director of the YMI Suzuki School of Music and directs the Dolce String Ensemble.
Laura and her husband, Ryan,  live in Congerville with their four children who are all young musicians studying the violin, cello, French horn, percussion and piano; they also enjoy serving at their church, working in their yard, and traveling to Montana. 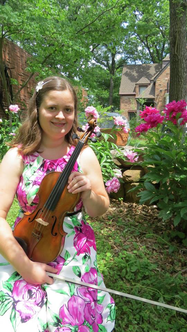 Courtney Silver, Violin
​ A native of Peoria, IL, Courtney Silver plays professionally with the Illinois Symphony Orchestra, the Peoria Symphony Orchestra, and the Chicago Composer’s Orchestra. She received teacher training from the Suzuki Association of the Americas in 2019.
Ms. Silver  began playing the violin at age 6 with the Suzuki Method. While growing up, Ms. Silver was a member of the Central Illinois Youth Symphony, where she was concertmaster for 2 years, and the Chicago Youth Symphony Orchestra, where she was the recipient of the prestigious Mollendorf Award.  At age 15, she won the Peoria Symphony Orchestra’s Young Artist Competition and subsequently made her debut soloing with the Peoria Symphony.
Ms. Silver is a graduate of Rice University in Houston, Texas.  She holds a bachelor’s degree in violin performance from Rice’s Shepherd School of Music. Ms. Silver completed her Master’s degree in violin performance at DePaul University in Chicago Illinois, where she studied with renowned violinist, Ilya Kaler. Her previous teachers include Marcia Henry Liebenow,  Gerardo Ribeiro, Kathleen Winkler, and Eric Halen. 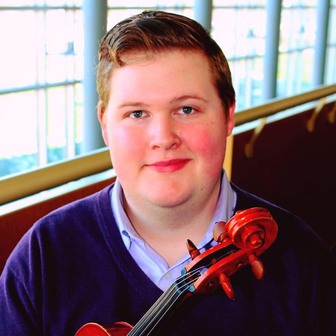 Douglas Temples, Violin/Viola
Douglas Temples is a South Carolina native currently living in Central Illinois. He currently serves as principal viola of the Illinois Valley Symphony Orchestra and as section viola for Sinfonia Da Camera. He also makes frequent appearances with the Illinois and Peoria Symphonies. He is on the administrative team as well as resident violist of the Coyote Creek Music Festival in CA. Douglas is also the co-founder and director of the “...And friends” chamber music concert series currently in its second season in Bloomington-Normal. A dedicated teacher, Douglas has a private studio of over 10 students
in Bloomington Illinois and is on the artist faculty of the Conservatory of Central Illinois in Champaign. Having received extensive pedagogy training in his undergraduate and graduate degrees, Douglas decided to continue his education by pursuing Suzuki training with Jeremy Hutchins and Edward Kreitman. While at Illinois State University, Douglas was heavily involved with the String Project program. He served as a lead teacher for the beginner Class; An assistant teacher for the two Intermediate classes, as well as conductor of the Sinfonia Youth Orchestra. Douglas graduated from Illinois State University with a masters in viola performance. He received his undergraduate degree from the University of Tennessee also in performance. When not teaching or performing, Douglas enjoys cooking for friends, reading a book, or visiting with family. ​ 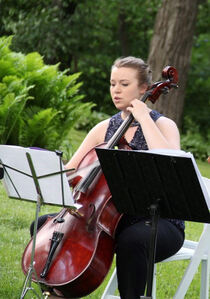 An Illinois native cellist, Kayla Schoeny has received both a Bachelor of Music Performance and a Masters of Music in String Performance and Literature from the University of Illinois. Her Masters studies have included extensive research into early childhood string pedagogy and developmental psychology. Ms. Schoeny continues to perform throughout the Mid-west and participate in competitions and festivals throughout the country. This has included residencies with the Texas Music Festival orchestral program, a season in the Ad Astra Music Festival residency string quartet, and she received University of Illinois Smith Competition Award. Ms. Schoeny continues to study under Dmitry Kouzov and Daniel McDonough. Outside of the cello, she also enjoys playing viola and piano with her students.

Christine Cicha, cello
Christine Cicha is a Kansas City native who has been transplanted to Central Illinois. She was the principal cellist of the Kansas City Civic Orchestra and the Illinois State University Symphony, and currently plays with the Illinois Valley Symphony Orchestra, Millikin Decatur Symphony, and the Peoria Symphony Orchestra. Before moving to Illinois she played with the Kansas City Civic Orchestra, the Mississippi Valley Orchestra (MN), Bloomington Civic Theater (MN), the Theater in the Park (KS), as well as pit orchestras for operas at the University of Minnesota. Ms. Cicha has also been a member of Oskaloosa (IA) Chamber Music Festival, performed at the Kansas City Fringe Festival, and is a founding member and co-director of the "... and friends" chamber ensemble based in Bloomington, IL. She received her Bachelor of Music in performance from the University of Minnesota and her Master of Music in performance from Illinois State University. She has studied under Dr. Adriana Ransom, Tanya Remenikova, and Larry Figg, and has performed in masterclasses for Dr. Brian Kubin and Brinton Smith. Ms. Cicha has over seven years of experience teaching a private studio and she is excited to join the YMI Suzuki School team.