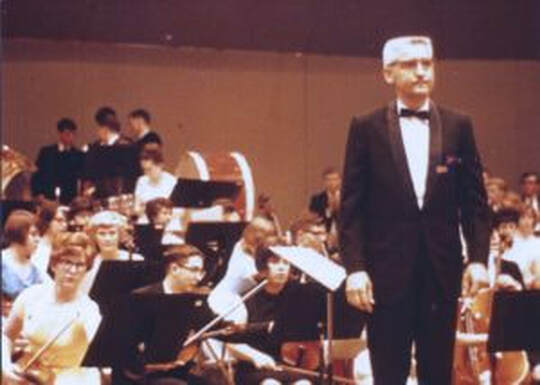 Elmer Szeppesy at concert.
​ In 1965, a small group of music educators in Central Illinois gathered to discuss plans for an organization to serve musically talented youth and their communities. It began when J. Elmer Szepessy, then Orchestra Director at Peoria High School, and Patricia Hackler, founder of the Suzuki Program in Pekin, approached Dr. Mark Bills, who was Superintendent of Peoria Public Schools, with an idea to establish a high school for the arts. Instead, it was decided to develop a performing arts organization, which would draw together the best of area high school musicians for an experience beyond that which could be offered in high school. As a result of support from Peoria Public Schools, Bradley University, University of Illinois, the American String Teachers Association and countless hours of work by people committed to the concept, Central Illinois Youth Symphony held its first auditions in October 1965. The debut concerts were in Peoria and Pekin in 1966. As did the young people of that first orchestra, those in succeeding years have come from large and small communities in a wide area of central Illinois.
Donald Miller, Assistant Professor of Music, University of Illinois, was conductor for the first season. After the successful launching of the orchestra, the baton went to David Daniels, Assistant Professor of Music at Knox College, Galesburg. In 1968, J. Elmer Szepessy, who had been in the charter group that formed Youth Symphony, became conductor, as well as serving as coordinator of Music in Peoria Public Schools and Orchestra Director at Richwoods High School. In the fall of 1978, William Wilsen, Associate Professor of Music at Knox College, began conducting the Youth Symphony, and continued until 1982. Jack Ranney, on the music faculty at the University of Illinois, directed from 1982 to 1991. Steven W. Eggleston, Professor of Music at Illinois Wesleyan University in Bloomington, directed the Orchestra from 1992 until 1998. Steven Huang, the Music Director of both the University of Chicago and Bradley University Chamber Orchestra conducted from 1998-2003. David Commanday, then PSO Music Director, conducted from 2003-2009, with Brian Dollinger taking over in the fall of 2009 thru April 2012. Dr. Glen Block, Professor of Conducting and Director of Orchestras and Opera at Illinois State University, conducted the Youth Symphony from 2012-2014. In 2014, Dr. Timothy Semanik of Bradley University served as an interim conductor, and in the fall of 2015 CIYS welcomed David Commanday back to the podium. Maestro Commanday continues to lead YMI as our Music Director.
Realizing the enthusiasm young musicians showed for Youth Symphony, the Board of Directors saw the need to expand the musical opportunities and provide a training ground for orchestra personnel with the establishment of Prep Orchestra in the autumn of 1970. Glen Sanderson, Orchestra Director in East Peoria, was the first director of the preparatory group, which progressed from a string ensemble to a full orchestra. Peter Wessler, Orchestra Director for Peoria Public Schools, was director from 1981 to 1995. The Prep Orchestra underwent a name change and became the Central Illinois Concert Orchestra in 1983. Carmen Diagostine directed the Concert Orchestra from 1996-1998.  The baton was passed to Melissa Siebenthal, Director of Orchestras for Normal Unit 5 School District, where she 1conducted from 1998-2008. Philip Rudd began conducting this orchestra in the fall of 2008 and finished his last concert with CIYS in November 2016. In January 2017, Dave Getz, Orchestra Director at Morton High School and CIYS alumnus, is the current conductor for the Central Illinois Youth Symphony.
In 1995, a new Preparatory String Orchestra was formed, as a result of workshop and operating grants from the Illinois Arts Council and Peoria Area Arts and Sciences Council. Betsy Jones, Peoria District 150 Orchestra and Carmen Diagostine, then orchestra director for Normal Public Schools shared the debut season baton. Betsy Jones conducted Prep Orchestra until November 2012. After that point, Rosemary Ardner (Orchestra Director in the Dunlap School District and freelance violinist) conducted the Prep and Reading Orchestras. Angela Englishharden took over Prep Orchestra in 2019.
In 1997 the first of the organization’s small ensembles was formed. The Percussion Ensemble, conducted by Peggy Bonner, was formed from the Youth Symphony and Concert Orchestra percussionists to provide additional challenge and highlight their talents. In January of 2006, a Brass Ensemble was formed with the brass students from orchestras, under the direction of Craig Fitzpatrick. In the fall of 2008, Brad Harris took over as conductor of the ensemble.
​January of 2008 saw the addition of a Flute Choir under the direction of Becky Schutte, Clarinet Choir and Woodwind Quintet under the direction of Sherill Diepenbrock, and string quartets first coached by David Commanday, Jane Hoffmire and Marcia Henry Liebenow. In the fall of 2009, CIYS added a Brass Quintet founded by Brad Harris, next coached by Dr. David Snyder. Since this time, small and chamber ensembles of various sizes and makeup have performed as part of CIYS programs.
​In 2017 the board of directors voted to update the name to Youth Music Illinois to break down student and parent  perception barriers while projecting more expansive and inclusive opportunities for the future.
2019 saw another change for the program as the reading orchestra resurfaced under a new name: the Dolce String Ensemble. Currently directed by  Laura Otto, (freelance violinist and Suzuki School Director) and focuses on basic ensemble playing, orchestral conduct, and the development of strong reading and listening skills.
In January 2020, the Suzuki School of Music was formed to offer a comprehensive program on violin, viola, and cello for students ages 4-18 years of age.   The Suzuki School’s Director, Laura Otto, will continue the vision and legacy of Patricia Hackler (Sun Foundation & Pekin Suzuki School of Music) to establish a Suzuki School once again in central Illinois.  The Suzuki method is the idea that all children can develop the skill to express themselves through music.  At the Suzuki School of Music we want to nurture beautiful character in every child through excellence in music. This program will utilize key Suzuki principles of parental involvement, starting children at an early age, frequent listening of music, repetition, encouragement, and learning with other children. ​